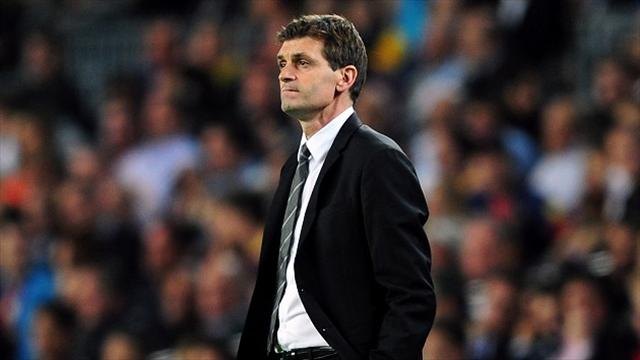 Tonight was a sad night in Barcelona.

When F.C Barcelona President Sandro Rosell called this evening’s emergency press conference, everyone—fans, players, officials and journalists—already had an idea of what was to be announced.

But they hoped they would be wrong.

END_OF_DOCUMENT_TOKEN_TO_BE_REPLACED

Barça: Orgullosos de Nuestros Colores (Barça: Proud of Our Colors), contains an extensive collection of photos of the first team never available to the public.

In Spanish journalist Ricard Torquemada’s second book about the Catalan football giants, he chronicles former coach Pep Guardiola’s last season in charge at the club, including Barcelona’s Champions League exit as well as snippets from the beginning of current manager Tito Vilanova’s reign.

The book contains exclusive photos of players inside the dressing room after falling to Chelsea 3-2 in the semifinal of the competition. Andres Iniesta, and Lionel Messi are seen disappointed in their side’s performance while the club’s sporting director Andoni Zubizarreta is pictured trying to console Cesc Fabregas.

The team had the chance on Tuesday to flip through the 204 page book, which hits stores on Friday and will be available in English, Spanish, and Catalan. Torquemada collaborated with official club photographer, Miguel Ruiz, in narrating the last year of the Guardiola era.

The photos from the book can be found here.

This article was originally published on InsideSpanishFootball.com on Nov. 28, 2012.